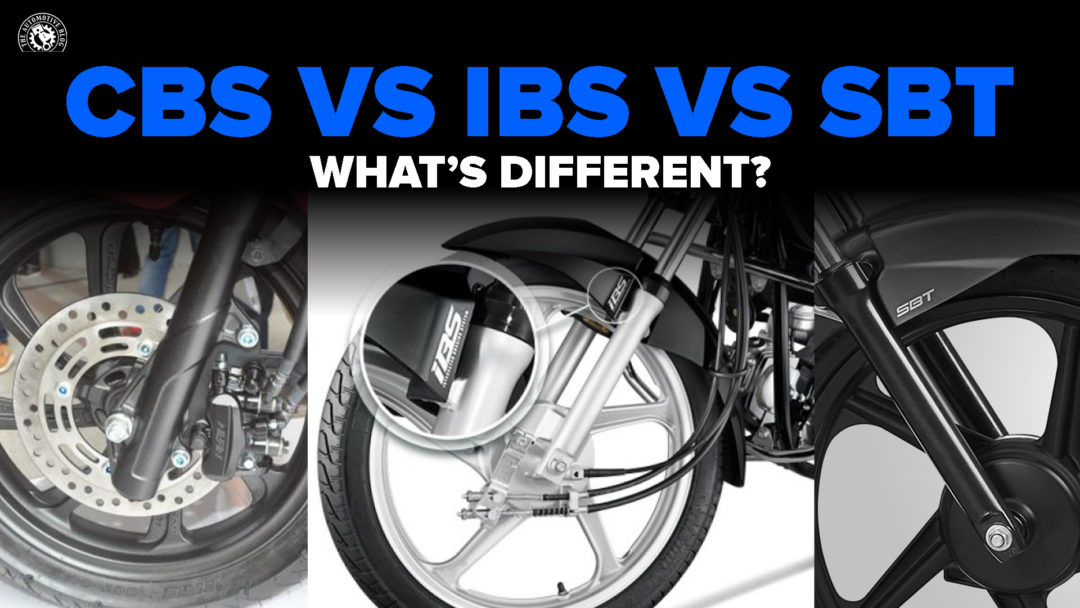 In our previous story, we have explained what are the key differences between ABS (Anti-lock Braking System) and CBS (Combined Braking System). You can read that article by clicking, HERE. Now, in case you are out in the market to purchase a new two-wheeler, you must have heard terms like CBS, IBS, and SBT too across various dealerships. So, in this article, we will simplify what’s different in CBS vs IBS vs SBT.

CBS stands for Combined Braking System. It was first developed by Honda Two-wheelers and Honda is still a pioneer in using this tech. As we all know, the most effective way of braking is applying both the front and rear brakes simultaneously and that’s what CBS does. It applies some percentage of front brakes even when only the rear brake lever has been pulled, thereby improving the overall braking performance.

IBS stands for Integrated Braking System. This term was coined by India’s largest two-wheeler manufacturer, Hero MotoCorp. The working principle of Hero MotoCorp’s IBS is completely similar to that of Honda Two-wheelers’ CBS. It’s just that the company formulated and implemented it as per its range of two-wheelers and coined a new term for marketing purposes.

Finally, we have SBT. The acronym SBT stands for Synchronised Braking Technology. This tech for two-wheelers has been developed by TVS Motor Company. The working principle of the SBT is again similar to that of Honda Two-wheelers’ CBS. In a nutshell, all these technologies work on the same principle and while some auto companies prefer to use this term as Honda’s CBS, others have coined new terms to differentiate themselves from the rest of OEMs.

What are your thoughts on the differences among CBS vs IBS vs SBS and which system is equipped in your motorcycle or scooter? Do let us know in the comments section below. Also, you can connect with us on our social media platforms, The Unbiased Blog, The Automotive Blog, and Nikhil Chawla, for all things tech and auto!

One thought on “CBS vs IBS vs SBT: What’s different?”