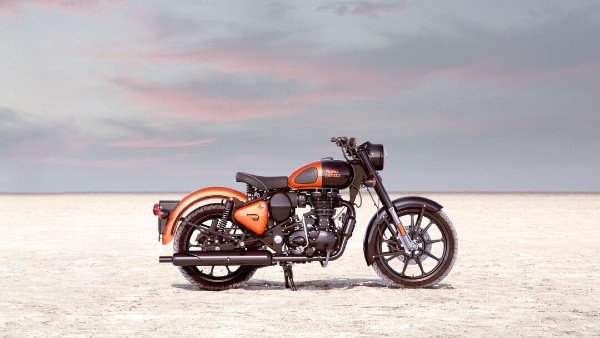 2021 Royal Enfield Classic 350 launched at Rs 1.84 lakh in India. There is a different model that includes the entry-level, rear drum brake equipped model (Redditch) costs Rs 1.84 lakh which makes it just sitting above it is the Halcyon that gets a disc brake and dual-channel ABS at Rs 1.93 lakh. There is also the Signals model that costs Rs 2.04 lakh, while the alloy-wheel-equipped Dark variant is priced at Rs 2.11 lakh. Not to forget the top-spec Chrome model that comes at Rs 2.15 lakh.

As for what the new Classic 350 offers, it comes with a basic single-cradle frame that has been replaced by a double-downtube unit. The maker also says that the Ground clearance on the 2021 Classic 350 has increased by 35mm, to a fairly substantial 170mm. While the braking is being handled by a 300mm front disc and a 270mm rotor at the rear with dual-channel ABS. The single-channel ABS models, meanwhile, use a drum brake at the rear.

The brand has also added a whole bunch of features that include an LCD, with a fuel gauge. It also gets two trip meters. The top-spec Chrome variant also gets the company’s Tripper navigation display as an optional extra. The maker has confirmed that it uses Google Maps data via a smartphone and solely displays navigation-related information. The bike also features updated lights all around but sticks to halogen-powered bulbs.

As for the engine, there is now a 349cc engine that replaces the 346cc UCE. Royal Enfield has said that this engine is the same as the one found on the Meteor 350. The peak power and torque figures stand at 20.3hp and 27Nm. The engine also continues to be paired to a five-speed gearbox.

Well with that said, do let us know your opinions on this post-2021 Royal Enfield Classic 350 launched at Rs 1.84 lakh in India by dropping a comment down below.

Realme GT Neo 2 5G Review: One for the gamers

macOS Monterey is now available to download. After using the Preview version since WWDC in June, here’s what we think