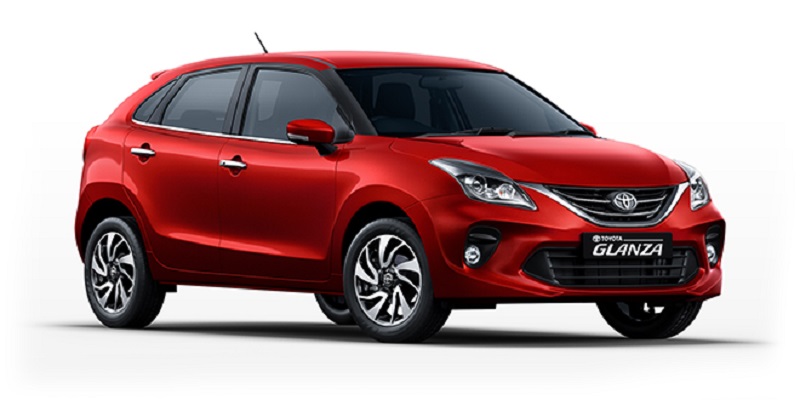 Toyota Glanza has been launched in India at a starting price of Rs 7.21 lakh (ex-showroom). The latest car by Toyota comes in two different variants with both manual as well as automatic transmission options. For those unaware, the Glanza comes as a part of Toyota’s partnership with Suzuki in India and is a rebranded version of the Maruti Suzuki Baleno.

The variants of the Glanza include a base option ‘G’ with manual and automatic transmission priced at Rs 7.21 lakh and Rs 8.29 lakh respectively. The higher-end comes as the ‘V’ version, again, with both the transmission packages, at Rs 7.58 lakh (manual) and Rs 8.90 lakh (CVT).

Both the variants use a 1.2-litre petrol engine coupled to a 5-speed transmission or a CVT system. Power specs of the G-manual option count to a total of 88.4 bhp at 6000 rpm, thanks to a mild-hybrid tech exclusive to this model, while that of its CVT variant is limited to a 81.7 bhp, both with 113 Nm of torque at 4400 rpm. As for the V variant, both the options put out 81.7 bhp and 113 Nm of torque at the respective rpms.

Toyota Glanza comes as the first car in India from the house of Toyota that offers Android Auto and Apple CarPlay. In addition, the hatchback is loaded with features like Bluetooth, MP3, AM, FM on its touchscreen infotainment system, dual front airbags, Anti-lock Braking System (ABS), Electronic Brakeforce Distribution (EBD), and Brake Assist (BA) for safety as standard across the variants.

To differentiate between the Glanza and the Baleno, Toyota has reworked the front grille, which now features more chrome than on Baleno. The two hatchbacks are even priced similarly except for their base variant.