Home Editorials What does the Tata Tigor, Maruti Suzuki Dzire 2017 and Ford Figo... 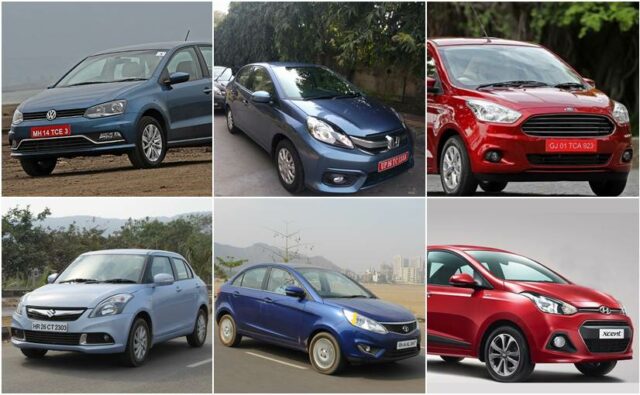 I’m getting emotional while I write this, because it may finally be over. The era of hatchbacks being turned into dahej-mobiles aka sedans, by attaching a box at the tail end. The era of turning neatly designed hatchbacks into ugly “compact sedans” might finally be over. I say this because of the arrival of 3 sedans that are based on hatchbacks, and yet their posteriors(boots) don’t look like an afterthought. What’s common between the Tata Tigor, Maruti Suzuki Dzire 2017 and Ford Figo Aspire is that all 3 exude proportionate and sedan like styling, signalling an end to the era of ugly compact sedans. We would like to make an honorary mention of the Vento, since it came much before these and had the styling bit on point. The reason why it wasn’t included in the list of the above trio is because we didn’t think the Vento marked the end of the ugly compact sedan era. That said, VW messed it up with its sub 3-meter hatchback – Ameo.

Looking back at the ones that championed this segment, lets call it UCS(ugly compact sedans). The first versions of Tata Indigo and Maruti Dzire looked like no effort went into blending the box at the end. And it wasn’t just the aam aadmi brands like Tata and Maruti, even Japanese giant Honda wilted under the pressure of catering to the segment by launching the Amaze. Being Honda, they tried very hard to stylize the boot to match the rest of the design of the Brio, which had a unique oblique-flat rear. In spite of their best attempts, the Amaze has two different crease lines running along the sides. One from the front, one front the rear. They don’t meet, they are not even parallel. They look like two different people started drawing from both ends and realised too late that the lines don’t meet.

Also Read – Why the average Indian (driver) will be brilliant at Formula 1? Fast forward to 2017, the consistency of the curvy high waistline of the Maruti Suzuki Dzire 2017, the swanky coupe-ish rear of the Tigor and the classy C Pillar blending into the boot of the Figo Aspire, all stand testimony to the fact that the compact sedan styling has finally moved away from the boxy after-thought eye sores. Why the average Indian (driver) will be brilliant at Formula 1?

Motorcycle Monogamy Is A Myth!