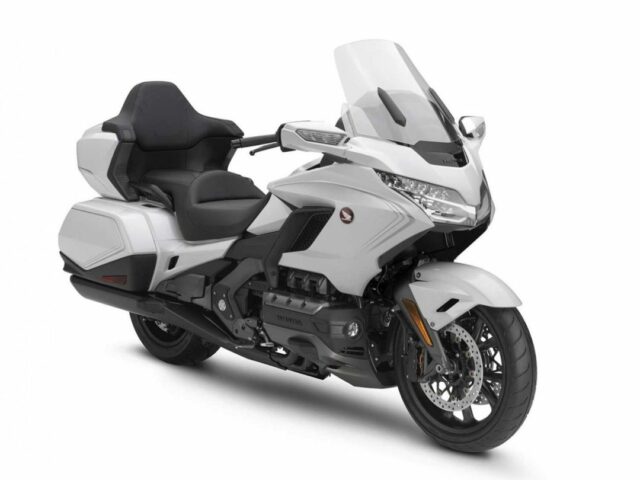 The huge Honda GL1800 Gold Wing, which is currently in its fifth generation, was revealed back in 2018. Today, Honda revealed the 2021 version, but, due to the close period of updates, the 2021 iteration doesn’t get a substantial update. Key aspects such as it’s 1,883cc flat-six engine, chassis components and design all remain unchanged. The Wing does, however, get a new grey colour scheme that Honda has dubbed Deep Pearl Grey.

The biggest update is the addition of added storage space. The top-box on the flagship Tour model gets 11 added litres of storage, giving it a total of 61 litres. This should be ample room to hold two large helmets, addressing the issues that Gold Wing owners have reported in the past. The tour model also comes with a redesigned pillion seat. with the seat getting a more relaxed angle, thicker foam and a taller profile

Additionally, the seats on the Tour now have a suede-like cover, while the standard Gold Wing and Gold Wing Automatic DCT receive coloured seat piping for better contrast. The base models get a few more subtle tweaks with red taillights and new paint jobs.

To add to the list of changes, the next big change is to the Gold Wing’s audio system. Honda upgraded the speakers to 45-watt units, optimized the automatic volume-adjustment level and added an XM radio antenna as standard. All the Gold Wing models also feature support for both Apple CarPlay and Android Auto.

What are your thoughts regarding the 2021 Gold Wing? Let us know in the comments below.

Also Read: Seidl says Porsche return to F1 Not to happen for the foreseeable future