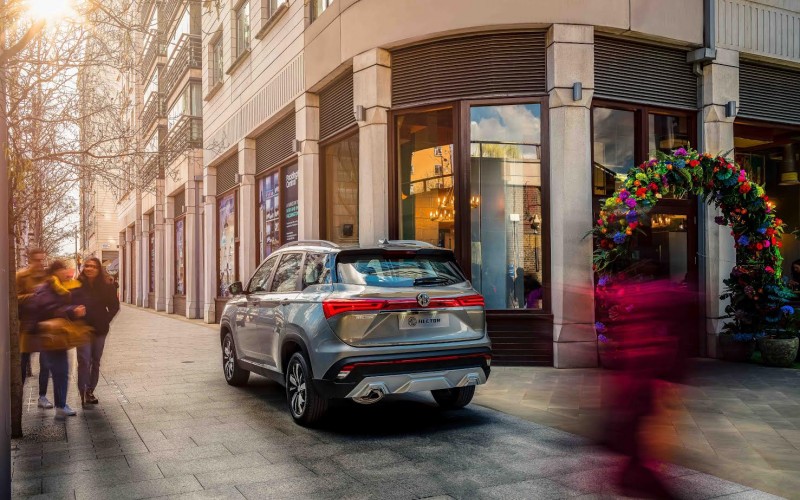 The booking will open on October 1, 2019, and the company has planned to produce 3,000 units per month starting October. MG Hector Sharp and Smart variants have received the highest share of bookings with over 50%.

MG Motor partnered with global tech companies like Microsoft, Adobe, Unlimited, SAP, Cisco, Gaana, TomTom and Nuance, the carmaker unveiled several industry-first features of Internet-enabled cars that will be available in the MG Hector. The brain of the iSMART Next Gen will be housed in a 10.4-inch Head Unit. The screen is designed with a vertical interface that allows the driver to control the entire car system with just a touch or voice command. The Head Unit is built to withstand extreme climatic conditions of India. It comes pre-loaded with entertainment content.

MG Hector iSMART Next Gen comes with an industry first embedded M2M sim that ensures that the car remains connected. The customized solution has been developed by Unlimit in partnership with Cisco and Airtel who have collaborated with their Jasper platform and telecommunication network respectively. The connected mobility solution on the MG Hector is Internet Protocol Version 6 (IPV6) ready for 5G.

Customers will be able to download the software updates immediately or schedule them for later, as in smartphones. The OTA feature would be standard in all MG cars enabled with iSMART NextGen for connected mobility, starting with MG Hector SUV. One of the best features of the MG Hector SUV is Voice Assist that works on the cloud and head unit. Developed by Nuance for MG India, it has been specifically designed for India for an Indian accent. As a result of built-innAI and ML algorithms, the system will learn and get better every day with usage. The Voice Assistant can be activated with ‘Hello MG’,  including opening and closing of windows and sunroof, ac control, navigation, etc. and works even under poor connectivity.

The iSMART Next Gen is supported by the iSMART mobile App. MG iSMART App is feature-rich like none other in the Indian market. The car gets scanned each time the App is opened, and information includes the location of the car, tyre pressure, or if the doors are locked or not. The owner can use the remote app to directly lock or unlock doors, turn on the ignition and switch on the air-conditioner. This is very useful in extreme weather conditions of India. It would also allow owners to schedule a service and keep track of service history. The App uses driver analytics data to help people drive smarter. The iSMART is hosted on Microsoft Azure Cloud providing impregnable cybersecurity for all data.