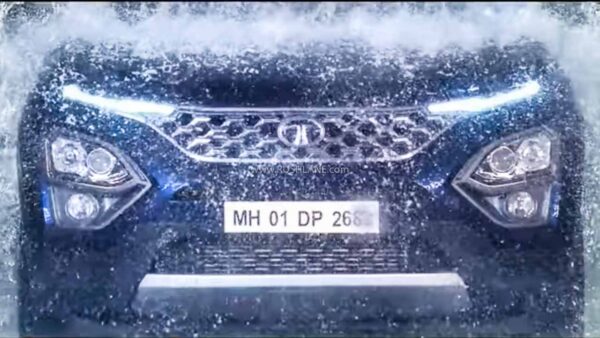 Tata is gearing up to bring the iconic Safari moniker back to the market after the older version of the Safari was discontinued last year owing to the emission norms. The SUV is set to be unveiled on January 26, followed by a launch in the coming weeks. As for the booking situation,  unofficial pre-bookings have already begun across select dealerships.

The Safari is a three-row SUV based on the Harrier, with the same engine to power the car and transmission options. In terms of dimensions, it is 63mm longer and 80mm taller to make space for the third-row passengers. It also gets a stepped-up roof which will make the cabin airier. According to rumours, there may be two variants of the car, with 6-seater and 7-seater options.

Cosmetic upgrades to the car will be subtle but adequate, so as to differentiate it from the Harrier. The car will get an exclusive dark blue shade in addition to the light blue shade seen on the Gravitas at the Auto Expo 2020.

Other enhancements to the Safari include a new chrome-finished tri-arrow grille, chrome detailing to the headlamps, a rugged-looking skid plate, function roof rails, a flatter than usual boot lid, a new tail lamp, a slightly refreshed rear bumper and more.

Moving to the inside, we expect a dual-tone black and cream interior theme as seen on the Gravitas. New features onboard include an electronic parking brake, connected car technology and front parking sensors.

The other existing features will include a panoramic sunroof, an 8.8-inch touchscreen infotainment unit, Xenon headlamps, a semi-digital instrument cluster and an electrically adjustable driver’s seat.

Tata always prioritises safety, which will be covered in this car by six airbags, ABS with EBD, rear parking camera, rear disc brakes, front and rear parking sensors and ESC.

The engine is capable of producing 170PS and 350Nm and is mated to a 6-speed manual and a 6-speed torque converter automatic. An AWD version might follow soon, but for now, there are no developments regarding the same.

The car is rumoured to be priced about 1 lakh more than the Harrier, which is a smaller variant of the Safari. For some context, the Harrier is priced at Rs 13.95 lakh to Rs 20.45 lakh (ex-showroom Delhi). The Safari will be competing with cars such as the MG Hector Plus and the XUV 500 from Mahindra.

What are your thoughts regarding the Safari? Are you excited for the launch? Let us know in the comments below.