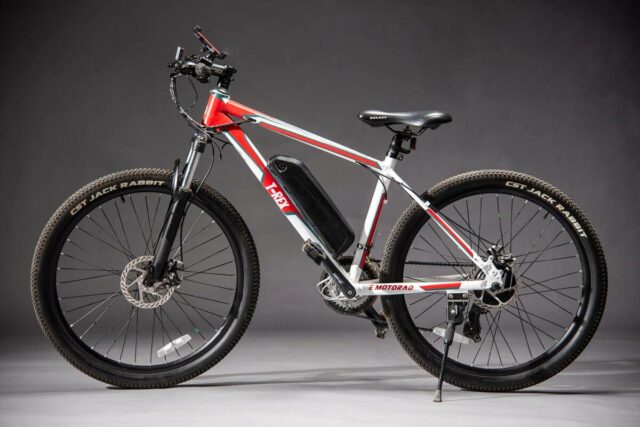 Pune based EV bike manufacturer EMotorad, also known as EM is soon going to launch it’s new e-bike T-Rex in India soon. The company says that the e-MTB has been designed especially for the Indian terrain. The 36V 7.8Ah battery on the T-Rex takes around four hours to get completely charged and the same can be charged through a regular power socket.

There will be an LCD 866 display along with a remote that can be used to perform various operations and toggle between different sets of information on the screen. Riders can see key aspects such as the battery charge indicator, distance, distance unit, pedal assist level, and much more on the screen. The T-Rex also comes with an LED headlight and taillight. Moreover, the T-Rex has CST tyres with aluminium rims. Claims arising in relation to the bike state a pedal-assist range of 60 km and a throttle range of 35-40 Km with the T-Rex and the top speed is pegged at 25km/h.

Speaking on the announcement, Rajib Gangopadhyay, Founder, EM said that post the successful launch of the brand’s flagship model EMX, EM was flooded with positive responses and the most common query was an all-electric hard-trail frame without suspension fitted rear frame. He added that the masses were requesting a mid-ranged e-bike with a pocket-friendly reach and thus, the R&D concluded with the introduction of the first prototype of T-Rex and finally went into production.

Gangopadhyay further added that EM then decided to integrate the front suspension to add further comfort while riding across the Indian terrain. For those unaware, the new e-bike T-Rex will be launched in the mid of January.

The bike will be positioned under the premium category with an expected price of Rs 45,000. The upcoming EMotorad T-Rex will come with a 6061 aluminium frame and the front suspension on this bike will be adjustable, which gives lots of ride options.